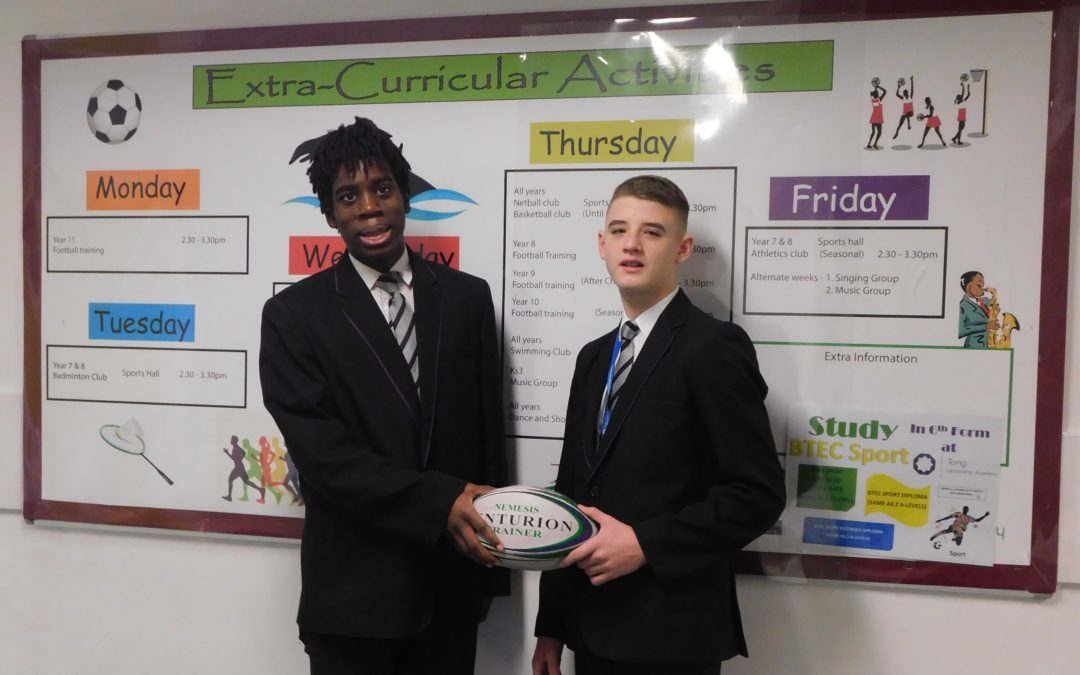 Two talented pupils have been offered the once in a lifetime opportunity to train with a professional rugby league club.

Osman Conteh, 15 and George Flanagan, 15, have both been awarded scholarships with the professional rugby league team Bradford Bulls. The scholarships will mean that the boys will enter intensive training schedules which will see them hone their agility, speed and skill with guidance from top coaches at the Championship club.

For Osman, who began playing the sport just two years ago, the scholarship has come as a huge bonus. Osman began his career with West Bowling where his speed soon set him apart from others. The coach was so impressed with his speed that within a month of playing rugby he was selected for the team. Since then he has gone from strength-to-strength and has now set his sights on becoming the next Carlin Isles, who is widely regarded as the world’s fastest rugby player. Osman said:

“I had been doing a lot of athletics training and when I was given the chance to try rugby league I thought I’d give it a go as it looked like a lot of fun. Carin Isles is definitely my inspiration. When I’m older, I want to be faster than him. When I was first offered the scholarship I was really excited but a bit scared as well. Everyone has high expectations of me and I know this is going to involve a lot of hard work. I’m so grateful for this opportunity, and I’m going to do the very best I can.“

For George Flanagan, rugby is a family affair. The talented youngster has been playing rugby since he was five thanks to encouragement from his rugby playing dad who plays for Bradford Bulls. Several clubs, including Huddersfield, Hull, Castleford and Bradford had their sights on the rising star, but the youngster stayed loyal to the Bull’s and selected them as his club of choice. George said:

“I’ve been playing rugby for as long as I can remember, so to be awarded this scholarship is a dream come true. I’m now focused on my training and I really want to be able to play for the under 16s. I hope that one day I’ll be able to play professionally. I’d really like to play for England. My mum and dad have helped me loads and I’m really grateful to them. Dad helps me with my training and my mum takes me to all my training sessions. They have told me they are so proud of me.”

Dan Styles, Principal of Tong Leadership Academy, praised the pupils for their achievement. He said:

“This is a wonderful opportunity for two of our very talented young people at Tong Leadership Academy. We wish them the very best of luck and look forward to cheering them on as they progress in their sporting endeavours.”

I am delighted to offer Osman and George a Scholarship at Bradford Bulls. They are very talented players with great attitudes, which is a great compliment to their parents, community clubs and school. I am looking forward to working with them over the next two years.”