A pupil has the perfect rugby role model to look up to as he aims to follow in footsteps of a member of the school’s physical education (PE) staff who plays for the Bradford Bulls.

Year 10 pupil Joseph Kellett has signed a two-year contract with the Bradford Bulls Academy and hopes, at the end of his training, to secure a coveted spot in the under 19s rugby league team. Eventually, Joseph hopes to play for Bulls’ first team, then in the Super League and his dream is to play in Australia, before eventually being called up for England.

Joseph has been playing rugby league since the age of five, after he was inspired to take up the sport after his mum and grandad took him to see a match.

He trains with the Bradford Bulls two times a week and has been lucky enough to be picked to play twice for the under 16s team – against Warrington and Wakefield. Joseph has also played for the Birkenshaw Blue Dogs for six years, training three times a week, and formerly was at Dudley Hill.

“Mum and dad are really happy and proud that I have got a scholarship. They are both really positive and encourage me to try my hardest and not give up. When I got the call asking to play for the under 16s, I was so happy.  The fact that the existing players are older and more experienced and I am playing with them makes me feel very proud. Training is very hard as they always push you until the end but the other players made me feel really welcome and part of the team.”

“I worked my way through the academy system at Bradford Bulls just like Joseph is doing now. I do lots of cardio and weight training after long days at school – putting in the extra work. It all pays off in the end, like 12 months ago when I received the call up to make my first team debut. However, the hard work never stops, as once you get in the team then you have to stay in.

“Joseph is a hard working young man and as long as he continues in this manner, he has the ability to go a long way.” 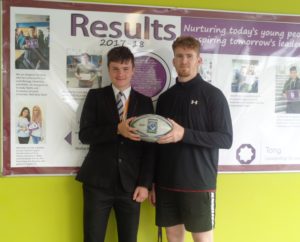 Pupil Joseph Kellett (left) has secured a place at Bradford Bulls Academy and is able to get some training tips from school PE assistant and Bradford Bulls first team player Rowan Milnes.