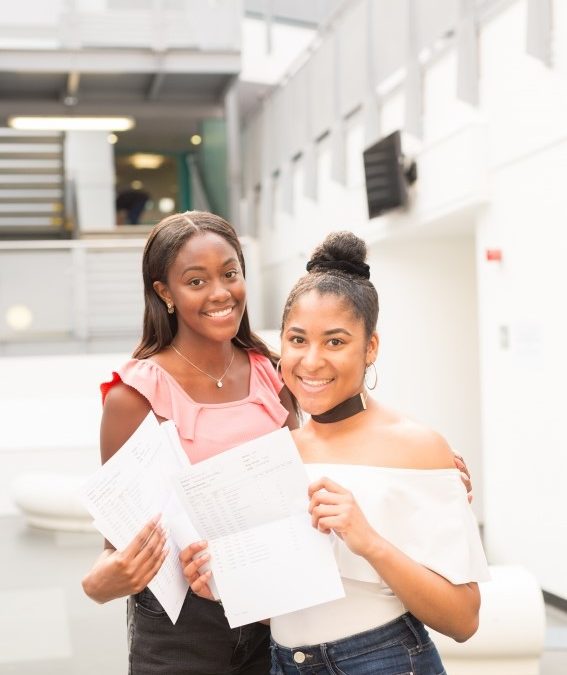 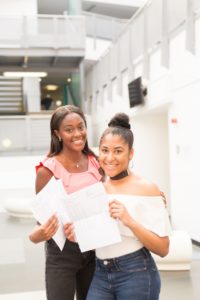 Well done to our Year 11 students who received their GCSE grades today.  Jadina Brissett and Danika McCaulsky (pictured right) are both celebrating after achieving 10 outstanding passes.  Jadina achieved an amazing A* in Science Further Additional along with four A’s in History, Psychology, Science Core and Science Additional. She also achieved Grade 8 in Maths and Grade 7 in both English Literature and Language.

“I’m so proud of my results.  I’m coming back to Tong 6th form, then hoping to go on to University to study Mechanical Engineering – but first we are going for cake!”

Danika was delighted with her 3 A*s for Science Additional, Science Further Additional and Child Development along with A’s in Science Core and Psychology.  Danika also achieved Grade 8 in both English Literature and English Language and Grade 7 in Maths.

“I am really proud of myself and a bit overwhelmed at the moment with the results.  I’m coming back to Tong 6th form to study Biology, Chemistry and Maths.  I’m thinking of studying to become a Doctor or a Psychologist.  I am so proud of Jadina’s results too, she has done fantastic.”

Having been close friends since year 7, Jadina and Danika have encouraged and supported each other over the last 5 years, challenging each other and working together in many areas to achieve their very best.

Other Tong Leadership Academy students celebrating today include Mohammod Ali-Akhbor, who achieved an outstanding Grade 9 in Maths, A* in Science Further Additional and three A’s in History, Science Core and Science Additional.  Mohammod was over the moon with his results.

“9 in Maths is fantastic news.  I did swear when I saw the result but you can’t print that! I am going to Bradford College to study Maths, Chemistry and Biology.  Eventually I want to train as a Doctor or go into Aviation.”

Owais Siddique achieved 10 GCSE’s which includes a fantastic Grade 9 in Maths, A* in Science Additional and two A’s in Science Core and Science Further Additional.

“I’m shaking, my results are fantastic.  My parents will be chuffed.  Thank you to my teachers for the support which has been ongoing and unconditional.”

Andris Bilerts achieved a fantastic Grade 8 in Maths, 2 A’s in Science Additional and Science Core and a Distinction Star in the European Computer Driving Licence.

Many of our Year 11 students have been heavily involved in sport. Atta’Ur Rehman was part of the sports teams throughout his time at Tong Leadership Academy and today celebrates achieving a Grade A in PE.

“I am really happy with English and PE”.

Aspiring Actor Zak Sutcliffe, who starred as Peter Pan in the ITV production, flew away with Grade B’s in Drama and Dance.  Zak will return to the 6th form in September to begin studying Performing Arts.

“I’m surprised how well I have done.  Miss Vo and Miss Harrington have helped me loads.  They have inspired me to do what I do.  They have made me stay in school and work hard and I am coming back to the 6th form to study Performing Arts.”

Natalia Plucinska said she was “buzzing” with her results which included A* in Child Development and two A’s in Science Additional and Science Further Additional.

“I was shaking and really nervous when I opened the envelope.  I am coming back to Tong 6th form and would like to become a Lawyer or a Teacher.”

Piotr Karpiej could not stop smiling after achieving A* in Polish, Grade 8 in Maths, A in Science Additional and B’s in Science Core and Science Further Additional.

George Irving was delighted with his Grade 8 in Maths, Grade 7 for English Literature and four A grades in PE, Science Core, Science Additional and Science Further Additional.

“I am ecstatic about my Grade 8 in Maths”.

George goes on to study Biology, Chemistry and Maths or Psychology at Greenhead College.

“I’m really shocked, it’s good news, I’m so pleased.  I was really worried yesterday, but today I feel I can run a marathon.  I’m coming back to Tong, and then hopefully going on to do an Acting Degree.”

Aiman Ilyas demonstrated an amazing work ethic during her time at school.  She was delighted to achieve Grade 8 in English Literature and three A’s in Art, Child Development and Food Technology.  Aiman was beaming when she opened her envelope.

“I’ve passed everything, I am really pleased.”

Asad Mahmood achieved results to be extremely proud of, excelling in Science. Asad was delighted with his 3 A’s in Science Core, Science Additional and Science Further Additional.

“Following our recent successful A Level results our students have received their GCSE results today. After months of hard work from the students themselves and the staff who supported them there were many success stories.”

“We have seen some excellent effort from individual students who have pushed themselves and had the enjoyment of seeing their hard work pay off.  We look forward to seeing those who are joining us in the sixth form in September and wish all of the class of 2017 success and happiness in their post 16 journeys.”